This hamlet is part of the former commune of Hauteville-Gondon merged on December 15, 1964 with that of Bourg Saint Maurice in order to create the ski resorts of Les Arcs.

In this beautiful village, you can discover there :

The Chapel under the name of Saint-Pantaleon 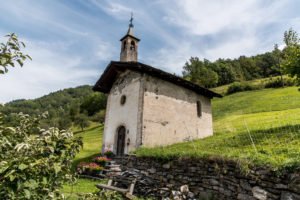 The altarpiece painting depicts him healing a child on his knees near his mother.

Saint-Pantaléon is the patron saint of doctors and midwives. As a doctor at the court of Emperor Maximian, he was known for treating his patients free of charge, asking only for God’s love in exchange. He was persecuted for his beliefs and beheaded in 305, refusing to deny his faith. He is celebrated on July 27th.

The statue of Saint Pantaléon XVIth-XVIIth century and the painting Martyrdom of Saint
Pantaléon by Nicomédie 2nd half of the XVIIth century is being restored.

This chapel would have been built in 1850 and maintained by the piety of the inhabitants.

The chapel is open every evening in May for prayer.

The Path to Heaven

The path to heaven linking the hamlets of Le Petit and Grand Gondon.

In the past, people from the “gondons” used to say that Napoleon would have had this road
built to connect the various villages of Hauteville-Gondon to Landry.
This road would have been very popular for the transportation of foodstuffs for the armies and travellers.
This information has not been confirmed. 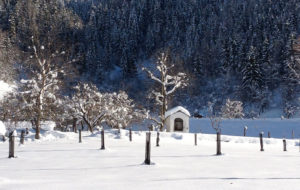 The Oratory of Saint Pantaleon

On the path to heaven, after having crossed a wooden bridge from Little Gondon, you will find an oratory.

On the right side of the oratory, a plaque from the Vanoise National Parke bearing the inscription :

« 18th century, built on the site of a chapel mentioned in 1634 which
was originally used by the two villages of Petit-Gondon and Grand-Gondon » 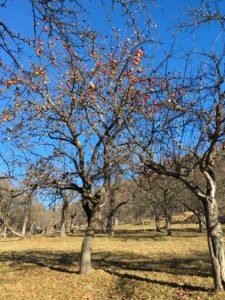 The Grand Gondon had a traditional orchard.

Fruit tree farming was an ancient practice and played an important role in village agriculture. The land register of 1728 shows a large number of orchard meadows.

In 2005, the association of the “croqueurs de pommes de Tarentaise” (Tarentaise apple cruncher association) and the municipality revived the orchard by financing the production, the planting of young trees and the development of the site.